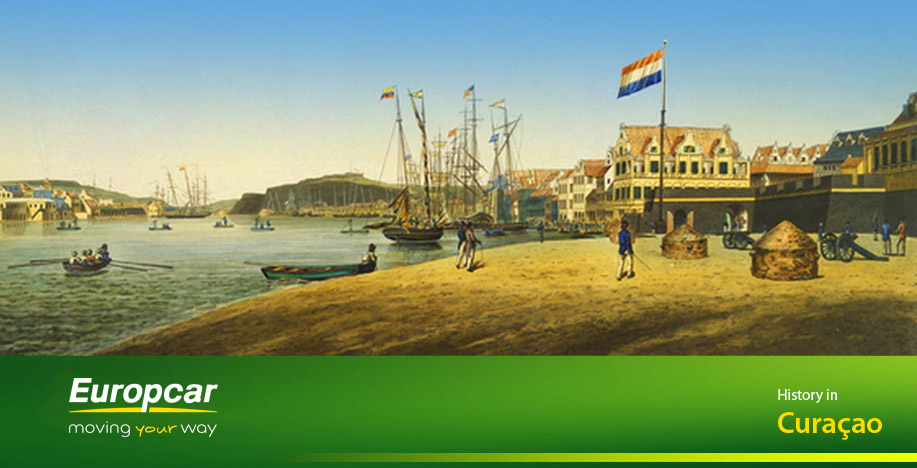 Once Home To The Real Pirates Of The Caribbean

The history of Curacao dates back to prehistoric times when the first known inhabitants were Arawak Amerindians who had traveled up in dugout canoes from settlements along the northeastern coastline of South America.

The first European explorers to discover the island were Spaniards who landed in 1499 under the command of Alonso de Ojeda. The Spaniards enslaved the natives and took them by force to other islands where there were more natural resources to be mined or harvested. The island was then known as one of the useless islands or Lesser Antilles.

There is much debate about where the name Curacao came from.  A growing consensus gives credit to the Portuguese and the likelihood that the island was named as a place of being cured or healing from scurvy because of the vitamin C available in the local fruit  Ilha da Curacao (Island of Healing). There are other theories you can read about here.

In 1634, the island was captured by the Dutch in 1634 abnd the Dutch West India Company founded the capital Willemstad. Within 30 years, the islands natural harbor became a hub of the North Atlantic Slave Trade.

Curacao was conquered and lost between the British, the French and the Dutch throughout the 18th and 19th centuries with Dutch rule stabilizing in 1815 and slavery subsequently abolished in 1863. Over the same period Curacao also became a destination for the real Pirates of the Caribbean and profiteers who took advantage of other secluded natural harbors on the island.

It was also during this period that the biggest maritime disaster in the region took place when the Dutch pirate hunting ship the Alphen exploded in the Anna bai harbor in the midst of Willemstad as depicted in the banner above. The Captain and 201 other crew members along with 50 local residents were killed. There is a great mystery surrounding the cause of the explosion which you can explore firsthand at the Curacao Maritime Museum.  Youll find an in-depth exhibit on the slave trade at Museum Kura Hulanda, and a living exhibit at the Mikve Israel-Emanuel Synagogue which is the oldest synagogue in active use in the New World.  Little wonder that the rich history, cultures and architecture of Curacao have earned it a place on the UNESCO World Cultural Heritage List.

The new century brought with it a new role for the harbor when the Dutch government and Royal Dutch Shell  built a large refinery on the former site of the slave trade market after an extensive oil deposit was discovered in the Maracaibo Basin in Venezuela.  All this brought a wave of affluence, investment and development to Curacao.

The structure of government also evolved over time as the Afro-Caribbean population became more involved in politics following civil unrest in the late 60s and eventually culminating in the current  structure of Curacao becoming an autonomous Country within the Kingdom of the Netherlands on the 10th of October, 2010.