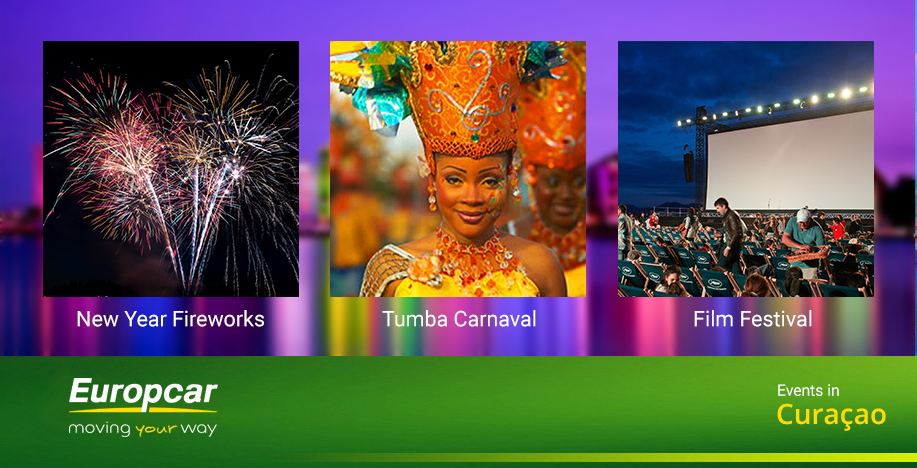 All throughout the year you'll find all kinds of Business, Cultural, Musical and Sporting events that will make your trip to our island even more memorable.

From the world-class Curacao North Sea Jazz Festival, to our annual Carnival and Heineken Regatta, you'll find a lot more to do than just lie in the sun, and a car hire from Europcar Curacao will help you take it all in.

During this televised 4-day event, thousands gather to witness the most popular bands, composers and singers compete in the largest song festival of the island. Here they elect the song that the carnival groups will dance to during the Carnival parade.

See beautifully decked horses prancing in the streets of Otrobanda with their riders dressed up to match the occasion, showing off their animals and their skills.

Popular local bands register with their respective singers and composers to participate in the annual Tumba Contest, the largest song festival on the island. It’s a lively occurrence and carnival enthusiasts anxiously await the publication of the sequence of participants.  Location: Curacao Festival Center

See the local children, from toddlers to preteens march through the streets of Otrobanda during their own full-scale parade.

Young people are in the spotlight with their own Carnival Parade that goes through the streets of Otrobanda.

In the countryside of the western part of the island, a full day of revelry takes place in the streets of Banda’bou.

The ‘Gran Marcha’ or the Grand Parade.

Thousands of participants show off their fantastic costumes and floats, dancing and strutting to the music of the Road March. Along the 10 km route, thousands of spectators dance and enjoy the pageantry.

The Carnival season closes with one last parade. The nighttime march has a special touch, since the floats are decorated with sparkling lights. At midnight King Momo idol is burned, as legend requires, pleasing the gods. Check out curacaocarnival.info for more updated information.

Catholics observe this official holiday and is the beginning of a week long spring school break.

The Séu or Harvest Parade, the second largest parade of the island, transforms the streets of Otrobanda into a jubilant display of folkloric expression, where groups dance through the streets to celebrate the harvest.

Curacao International Film Festival Rotterdam. Features the works of international and regional independent filmmakers and will also give the local first-time filmmakers an opportunity to exhibit their work. www.curacaoiffr.com for more information.

Locals celebrate the birthday of King Willem Alexander with musical celebrations in a festive atmosphere and the largest flea market of the island in downtown Punda.

The annual MCB Curacao Master is one of the largest golf tournaments of the Caribbean held at the luxurious Blue Bay Resort. For the ninth time, this tropical golf course hosts some world class players who flock to Curacao to measure their dominance on these elaborate grounds.

The International Dragracing Fest has been held annually since 1971, where riders from the Netherlands, Puerto Rico, the Dominican Republic, Colombia, Venezuela, Aruba, Bonaire, and Curacao compete in ten different categories for cars and five for motorcycles. It is organized at Curacao International Raceway, located in Ronde Klip, Curacao. Visit curacaodrag.com for more details.

The ultimate athlete can challenge its physical endurance by swimming 1.5 kilometers, bike 40 kilometers, to then run 10 kilometers during this epic event held at the sprawling grounds of the Santa Barbara Golf & Beach Resort.

Come and enjoy three days of sailing, parties, and live music, where Heineken turns Punda into the ultimate Regatta Village. The pinnacle of the event is the closing ceremony, where several Caribbean artists celebrate the victorious display of aquatic sportsmanship. Visit facebook.com/regattacuracao for more information.

The Curacao Flag is commemorated with official ceremonies and cultural events at Plaza Brion and the village of Barber.

Led by local hero Tula, the 1795 slave uprising, which is the most important in Curacao’s history, is remembered with musical and cultural events at the Rif Waterfront and at Landhuis Kenepa, located at Banda’bou. Fundashon Parke Nashonal: 563-0358

Every September, Curacao Clean Up, an initiative that wants to make a positive impact on the environment of Curacao, activates over 2000 citizens to go out clean our island.

Commemorating 10-10-10, when Curacao obtained its autonomous status within the Dutch Kingdom.

The event, with participating runners from over thirty countries, starts at the Lions Dive & Beach Resort and is concluded on the beach with an awards ceremony and after party with various local artists.